A Norwegian Mountain Escape to Rjukan

One of the questions I’ve gotten the most since moving to Norway is from people traveling to Oslo and wondering where to visit near Oslo to really experience Norway. And it’s always stumped me, couse I’ve only really ever been a tourist on Norway’s west coast. That is, until last week, when I realized that the answer was just around the corner from my home – the neighboring town of Rjukan! 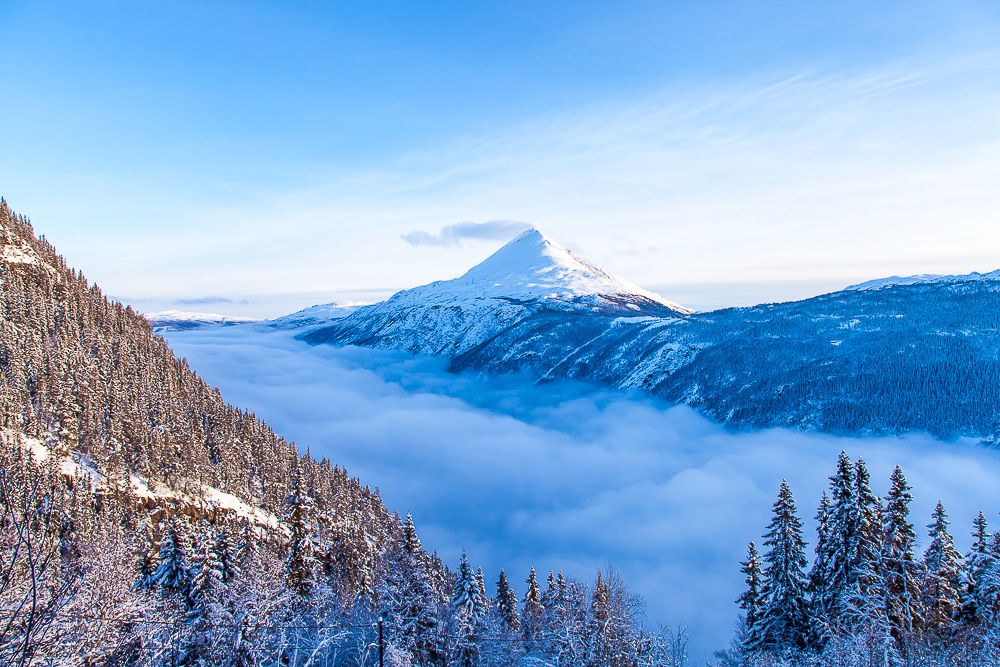 Okay, you can’t actually see Rjukan here because of the fog, but I swear there’s a town in there somewhere!

I’ve always loved Rjukan, and in fact Dan is actually quite obsessed with the little industrial town, yet somehow I never really thought of it as a tourist destination. Which is absurd, because not only does it lie at the foot of Gaustatoppen, which must be Norway’s most beautiful mountain, but it also has some fascinating World War II history and industrihistory, that was recently made a UNESCO World Heritage Site, like no big deal.

What I hadn’t realized, however, is that there are so many fun attractions in Rjukan! So I owe a huge thanks to the people at Visit Rjukan for inviting me to experience all the town has to offer.

Dan and I spent most of our time in Rjukan talking about all the friends and family members we want to take on this exact same trip, and by the end – as always! – we were talking about how maybe this where we should live in Norway.

Usually I write about hotels last, but our stay at Gaustablikk Høyfjellshotell was so key to our perfect weekend that this time I’m putting it first.

Gaustablikk is one of many mountain hotels in Norway, and even if you can’t make it to Rjukan I definitely recommend trying to stay at a mountain hotel somewhere here because they are just so special and so Norwegian. Like, if you only have a weekend here and want to really experience Norway, I’d say stay at a høyfjellshotell somewhere and you’ll be sorted.

Gaustablikk was built in 1970 and something about the atmosphere does feel a bit frozen in time – which is impressive considering it was renovated last year. Every little detail in the hotel feels so utterly Norwegian, from the delicious Scandinavian breakfast buffet to the handcrafts and local artwork displayed on the walls to the people whizzing down the ski slopes at the hotel’s doorstep.

But my favorite part was the view out my bedroom window: Gaustatoppen, aka Norwegian nature at its finest!

Amazing view from my bedroom window: Gaustatoppen, aka Norwegian nature at its finest!

After Gaustablikk, my favorite experience in Rjukan was Krossobanen.

Rjukan lies deep in a narrow valley, which means that the town center doesn’t see any sunlight for six months out of the year. So in 1928 Norsk Hydro, the big power plant in town, built Krossobanen, a cable car that in mere minutes could whisk the town’s sun-deprived industry workers up to the sunny mountaintop.

And also beautiful. I the video from my trip to Rjukan, attached in the begynning of the article you could  watch the ride up Krossobanen. I promise it’s worth it.

Krossobanen takes you up to the foot of Hardangervidda, so it’s also the perfect way to start a hiking trip into the plateau.

And if you’re still worried about those sun-deprived Rjukan residents, as of 2013 there’s no longer a need to worry about them – they’ve come up with a way to use mirrors to reflect sunlight down into the town square.

Read more about the Sun Mirrors 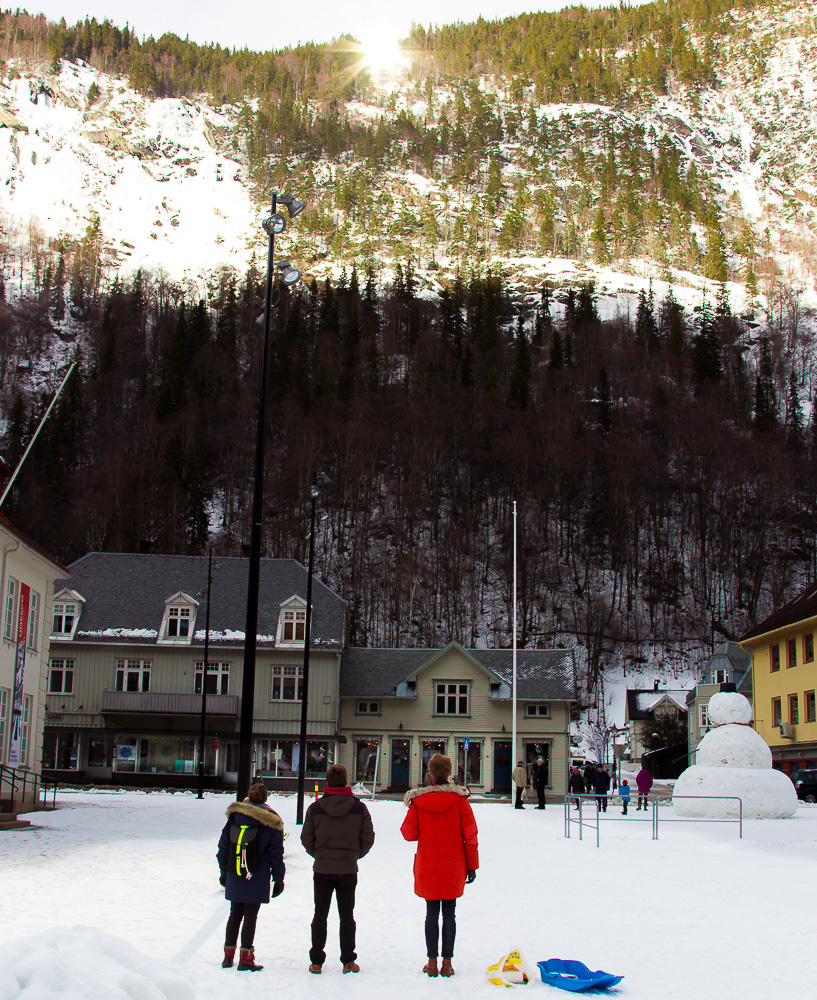 I know I just said Krossobanen was my favorite experience in Rjukan after Gaustablikk, but maybe actually my favorite was Gaustabanen? Ahh I can’t decide!

Gaustabanen is a funicular that takes you deep inside Gaustatoppen and up to the top of the mountain. Completed in 1959 it was first used by the Norwegian Armed Forces and NATO, but in 2010 it opened for tourists, woohoo!

I spent a lot of the ride up squealing – it’s super steep! And it brings you up to the most beautiful views. Um, okay, there wasn’t much of a view when we first went out onto the mountain.

But after about ten minutes the skies cleared! I was too excited to take photos (whoops) but I did capture the view in the video at the bottom of the post, so you can see it there.

Besides the dramatic surrounding landscape, the coolest thing to me about Rjukan is its industrial history. And the perfect place to learn about it is at Vemork, the hydroelectric power plant built by Norsk Hydro in 1911, which now also houses a museum. Basically, it’s what makes Rjukan Rjukan.

Part of what I love about visiting Rjukan is that it feels just a bit like traveling back in time, which I think is due to how strongly the power plant shaped the building and development of the town.

The houses downtown were built for the industry workers, and even the local movie theater is in the old union house. The power plant is responsible for Rjukan’s importance as an industrial heritage site (and UNESCO status!) as well as its significance in World War II.

Long story short, while the plant was built to power a fertilizer factory, it also produced heavy water, which was a key ingredient in the German recipe for the atomic bomb. And so when Germany was occupying Norway and had control of the plant the heroes of Telemark had to sneak in and destroy the heavy water section of the plant to stop Germany from making the bomb.

And as true Norwegian heroes, they did it on skis!

It’s a crazy story, and in the museum you can see a film about it, or you can watch The Heroes of Telemark (fun fact: the founder of Gaustablikk Hotel was Kirk Douglas’s stunt man for the skiing scenes!), Max Manus: Man of War, or the recent TV mini-series The Saboteurs. Dan and I actually started watching the series without realizing what it was about, so we got a little excited when we realized it was set in Rjukan! 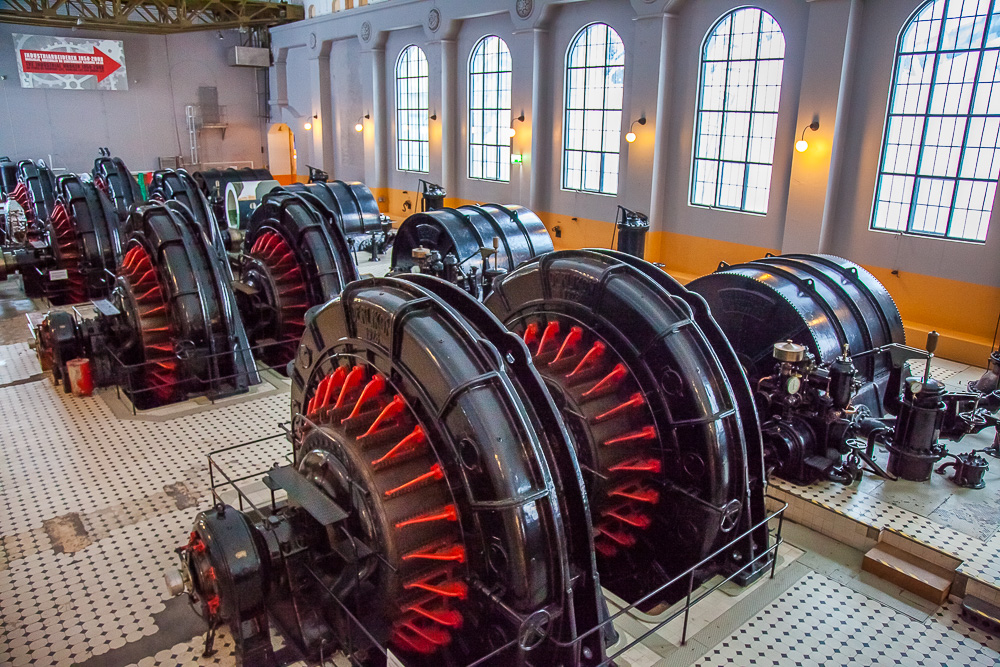 Our last stop in Rjukan was at Rjukanbadet, the local swimming pool complex. It has several indoor and outdoor (heated!) swimming pools and hot tubs, as well as a sauna and steam room. I wouldn’t say it’s a must-see while in Rjukan, but if you’re looking for a fun way to relax then it’s pretty perfect.

How to Get to Rjukan

Rjukan is a 2.5 hour drive from Oslo. There is a bus from Oslo that takes three and a half hours (see nor-way.no for tickets) which I take quite often, but if possible I would recommend renting a car instead, because that way you’ll see so much more.

And if you have time, take a detour through Notodden, which is also on UNESCO’s world heritage list for its industrial history, and stop by Heddal stave church. I promise it’s well worth the detour! And if you’re coming in the summer then you can drive from Notodden up over Gaustatoppen to get to Rjukan. Again, worth the detour!

By Silvia Lawrence - Heart My Backpack